3steplT - Leading the Way in Sustainable IT

Finland's economy is beginning to stabilize following the first wave of the coronavirus pandemic, and the country's vibrant tech sector is set to play a leading role in supporting growth. Within a thriving ecosystem of disruptive start-ups, technology accounts for more than 50% of the Finnish exports, and more than 700,000 people, or nearly 30% of the workforce are directly or indirectly employed by the tech sector.

This means the country's future rests on the shoulders of private sector innovators like 3steplT, a fast-growing company offering computer leasing and technology lifecycle management services that have already made a profound impact on client operations across Europe.

3steplT was founded in 1997 on what was then a completely unknown concept: the circular economy. Its business model was premised on the notion that instead of investing hundreds of thousands on desktops, laptops and smartphones, which would eventually become outdated and be thrown away, companies could lease their devices. This would support a timely refresh strategy enabling businesses to remain at the forefront of innovation. 3steplT founders also saw demand for businesses looking to dispose of obsolete IT equipment, so it made a unique offer: it would buy old equipment at fair market value to be refurbished and resold. In doing so, it helped businesses to transition to a circular economy model, reducing their carbon footprint and electronic waste in the process. This is the circular economy model in action. 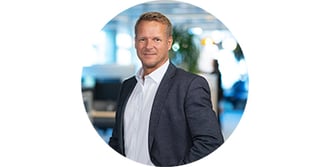 Chairman Jarkko Veijalainen said launching the business took guts. "We asked ourselves what people did with redundant IT equipment. We found that devices were typically given to employees, stored somewhere or thrown away. Each of these choices presented significant data security risks which was a growing customer concern. This was a starting point. But in practice we were just two guys with a bicycle, and the players in the market were huge. We started from scratch and we had to believe we had something more than they did. We decided to give it a go for 12 months, we persevered, and it did work," he said.

3steplT combines a team of experienced IT professionals, a well-developed and sustainable supply chain, and an asset management platform that allows customers to manage and renew their IT devices. That's where its name comes from: Step one is acquire, step two is manage, and step three is refresh. Although it was a risk in the late 1990s when the internet barely existed, 3steplT's business model worked so well that the company soon expanded to Sweden with venture capital support. Though Veijalainen and his co-founder sold 42% of the company in the early 2000s, they re-acquired this share back in 2007. This was driven by a firm conviction that the business model had a newfound global appeal given the popular shift towards new acquisition models such as the subscription economy, as well as an increasing focus on sustainability.

Many milestones followed. By 2010, 32% of the company was acquired by institutional investors, giving it access to resources to fuel expansion and development of next generation services to meet the demands of an international client base. It continued to grow across Scandinavia, strengthening operations in Norway and Denmark, as more and more businesses began to realize the appeal of sustainable IT.

"The biggest difference between us and a typical leasing company is that we are very keen to get old IT devices back. Last year more than 500,000 devices were refurbished securely, using best-in-class data sanitization techniques. We then found a new home for 98% of these devices which is a big thing environmentally. Our customers can trust that they will have the best technology in the beginning, and that there will be someone to help them at the end of the cycle," said Veijalainen.

The company's latest, and arguably biggest milestone came in February 2019, when it joined forces with French bank BNP Paribas to create a European strategic alliance, which included a joint venture company and a partnership to serve international customers. The deal was finalized in October 2019. This alliance marked 3steplT's entrance into Western Europe, with 18 countries including France, Italy, Germany, Belgium, the Netherlands, and the UK now set to benefit from its unique approach to IT lifecycle management and sustainable tech practices. The deal also demonstrated that major multinationals are recognizing the benefits of incorporating sustainability into their business models.

The company now has 2.2 million assets under management, and business has been booming - in 2019, revenues hit almost €700 million and the outlook for 2020 looks equally promising, forecast to top €1billion consolidated revenue. The ambition now is to become a €2 billion business over the next five years and expansion across the Atlantic beckons. "Our next goal is to widen our global footprint by expanding into America; our sustainable IT consumption model is wholly scalable and appeals to public, mid-market and enterprise clients who need to manage their IT efficiently, securely and sustainably," said Veijalainen.

The full feature in Newsweek is available to read here.